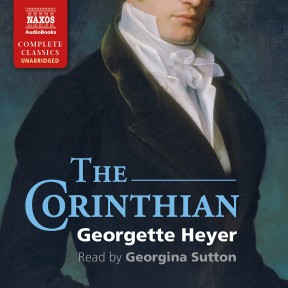 The accomplished Corinthian Sir Richard Wyndham is wealthy, sophisticated, handsome and supremely bored. Tired of his aristocratic family constantly pressuring him to get married, he determines to run away after meeting the delightful, unconventional heroine Penelope Creed. Penelope, literally, falls into his life late one night as she hangs from the window of her aunt’s house − she too attempting to escape the pressures of forced marriage. The two allies become embroiled in a series of hilarious madcap adventures as they cross-dress, run into escaped criminals and save people from their own dramatics. Little do they predict their feelings for one another blossoming into romance.

A truly entertaining farce, enlivened by the most wonderful narration by Georgina Sutton. Ms Sutton gives each character a fully-fledged personality, some subtle, more over-the-top, with the perfect bored air for Richard contrasted with the matter-of-fact-ness of Pen who is constantly fascinated with their grand adventure. It’s farce, it’s a road trip/cabin trip, it features cross-dressing and just a touch of suspense – and it’s funny. I am not always a fan of Heyer’s books, but I found The Corinthian completely delightful and captivating when I read it in print many years ago, and even more so in audio.