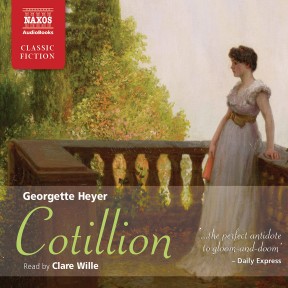 Cotillion, one of the most popular historical novels by Regency romance expert Georgette Heyer, is presented in Naxos AudioBooks style, with classical music enhancing the production. Kitty Charing comes to London from the country to find a husband and secure her fortune. It is the first of two Heyer titles planned for 2009. Clare Wille was widely praised for her reading of Cranford.

I own all of Georgette Heyer’s Regency romances – and Naxos’ delicious recording of Cotillion, wonderfully read by Claire Wille, has joined them on my Heyer shelf. Here lively Kitty Charing, whose extremely rich adopted uncle, wants her to marry one of his nephews, invites them all to his estate. Only the handsome rake, Jack Westruther, doesn’t put in an appearance – and, of course, it’s Jack that Kitty wants. Intent on making him jealous – and enjoying the delights of London, Kitty persuades another of the nephews, the Honourable Freddy Stanton, a dandy of some wit and kindness, to pretend to be engaged to her. Characters charming and comic, romance fervent and frowned upon – the perfect antidote to gloom-and-doom on any day of the year.

I am so encouraged that Naxos Audiobooks is venturing into Heyerland with their first audio recording of one of Georgette Heyer’s most beloved novels Cotillion, considered one of the greatest Regency romances of all time. Up until this new recording, Heyer audios could only be obtained through sources in England, at astronomical prices. This abridged audio is read by Clare Willie and contains four CDs. Hopefully, if it sells well, they will in future bring us additional unabridged versions. Publisher’s description: Young Kitty Charing stands to inherit a vast fortune from her irascible great-uncle Matthew – provided she marries one of her cousins. Kitty is not wholly adverse to the plan, if the right nephew proposes. Unfortunately, Kitty has set her heart on Jack Westruther, a confirmed rake, who seems to have no inclination to marry her anytime soon. In an effort to make Jack jealous, and to see a little more of the world than her isolated life on her great-uncle’s estate has afforded her, Kitty devises a plan. She convinces yet another of her cousins, the honorable Freddy Standen, to pretend to be engaged to her. Her plan would bring her to London on a visit to Freddy’s family and (hopefully) render the elusive Mr Westruther madly jealous. Thus begins Cotillion, arguably the funniest, most charming of Georgette Heyer’s many delightful Regency romances.

Georgette Heyer deserves the recognition implicit in her inclusion in the Naxos Classic Fiction list, and Cotillion is an excellent first choice. Her funniest book, it is a plucky-innocent-reforms-rake parody, written in her prime in 1953. It features the orphaned Kitty Charing, who is piqued by the “devilish handsome” Jack Westrother’s failure to turn up when her guardian tells his great-nephews that his fortune goes with her hand. Kitty pretends to be engaged to her cousin Freddy to do a London season. Cue dress-shop scenes, but also social realities as she discovers the expediency of the marriage market. Heyer immersed herself in 18th-century literature, and listening to Clare Wille’s reading you appreciate her gift for the right phrase.

Uncle Matthew decrees that adopted Kitty will inherit if she marries one of her cousins. Kitty fancies Jack the cad and coaxes gentle Freddy into a mock engagement so she can pursue him in London. But of course, amidst a flutter of meticulously detailed bonnets and dresses, it all gets horribly complicated – is Jack just after the old man’s ‘roll of soft’ rather than Kitty? And does she really love Freddy after all? The deft narration captures the spirit of this Regency romance which is set, with historical accuracy, in 1816.

For both period feel and satisfying plot, Georgette Heyer is hard to beat. Cotillion is her funniest book, a tongue-in-cheek parody of what starts as a predictable “plucky innocent reforms a rake” tale. The orphaned Kitty Charing is enamoured of her cousin Jack Westrother, a “devilish handsome out-and-outer of a Corinthian”, but piqued by his failure to turn up when her guardian tells his great-nephews that his fortune goes with her hand. She persuades her dandyish cousin Freddy (a “veritable tulip and a pink of the ton”) to pretend to be engaged to her so that she can do a London season. Cue sumptuous dress-shop and drapery scenes, but also sharp social realities as Kitty discovers that most girls on the marriage market have to put expediency before love. Excellent and hilarious twists of fortune ensue, and I defy you to guess the outcome. Clare Wille’s spirited reading makes you appreciate Heyer’s gift for finding the right colourful phrase for every occasion.

The British Regency period (1811–20), though brief, has become an object of fascination today. It is a world of complex social hierarchies, of Jane Austen, of glittering fashions, dances, scheming duchesses and naïve young heroines in Empire-line dresses. It is a world which Georgette Heyer made her own. From 1921 until her death in 1974 Heyer published a stream of immensely successful novels – including romances, thrillers, mysteries and historical fiction – but it was for her Regency romances that she became best-known.

Born in London in 1902, the eldest of three children, Heyer spent her early life living in Paris with her parents, George and Sylvia, and her brothers, Boris and Frank. The family returned to England at the outbreak of World War I in 1914, her father serving in the British Army and eventually being awarded an MBE. It was originally to amuse her brother Boris that Heyer wrote what was to be her first published novel, The Black Moth, begun when she was just 17. Her father encouraged his talented daughter, eventually finding a publisher for the book, which was released in 1921. This was the beginning of a literary career that spanned more than five decades.

A year before The Black Moth was published, Heyer had met her future husband, Ronald Rougier. She had become acquainted with him while on holiday with her family, when he was studying to become a mining engineer, and five years later they were married. By this time she had already published five novels, although she had yet to achieve the kind of popularity that characterised her later work. 1925 was important for Heyer in another way, too: her father died of a heart attack in June.

His help and support had enabled her to launch her career as a writer, but George Heyer did not live to see his daughter’s first major success. These Old Shades did not have the most auspicious of starts: published during the General Strike of 1926, it received no newspaper coverage, reviews or advertising. Nevertheless, it met with great enthusiasm from the public, selling 190,000 copies and firmly establishing her name. From then on she refused to give interviews, promote her books or publicise herself in any way, saying ‘my private life concerns no one but myself and my family’.

Cotillion was published in 1953 and, like all her novels, it is characterised by meticulous attention to detail and an encyclopaedic knowledge of the language, manners and dress of the Regency period. It weaves real events and people into the plot with unerring accuracy – a hallmark of her work. She was careful to a painstaking degree: referring to An Infamous Army (1937), featuring the Duke of Wellington, she stated that she attributed no words to him which he had not spoken or written in real life. She even went so far as to purchase one of his letters so that she could copy his verbal style more closely. Much of her time and money were spent chasing up original sources and rare books to add ever greater realism to her work, and she owned a huge library of works on the period.

Although not explicitly stated in the book, it is clear that Cotillion is set in 1816: Heyer mentions several historical events which make it possible to pinpoint the date exactly. For example, during their mock engagement Kitty and Freddy go to see the Elgin Marbles at Burlington House, now the Royal Academy. They were exhibited there in 1816 before being purchased by the British government and moved to the British Museum later that year, where they have remained ever since. Freddy mentions the ‘deuce of a dust’ which the Marbles stirred up: Elgin was heavily criticised by many contemporaries for taking the Marbles from Athens, creating a debate which still continues today. And Lord Buckhaven, Freddy’s brother-in-law, is described as being away on Lord Amherst’s ‘Chinese mission’. William Amherst, First Earl of Amherst (1773–1857), was sent in 1816 as Ambassador Extraordinary to the court of China’s Qing Dynasty on a diplomatic mission. When the mission failed, the party returned home (it was shipwrecked on the way and did not reach England until 1817).

Many of the places which Heyer uses as locations in Cotillion are also authentic: Almack’s, White’s, Bullock’s Museum and Grafton House, to name a few. Grafton House, a popular Bond Street linen-draper’s shop, is actually mentioned in Jane Austen’s letters. She wrote: ‘the whole Counter was thronged and we waited full half an hour before we could be attended to’, echoing the experience described in Heyer’s novel. Clubs were also an important part of upper-class Regency life: Freddy’s father is a member of White’s, the exclusive gentleman’s club in St James’s; his cousin Jack gambles at Watier’s, which eventually closed its doors in 1819, having garnered a reputation as a haven for card cheats; and Almack’s Assembly Rooms, one of London’s first mixed-sex clubs, makes its appearance in many of Heyer’s books. Founded in 1765, it became the most exclusive social venue in London. Admission was decided by the ‘Patronesses’, and their seal of approval guaranteed acceptance into the ton (Regency high society). Heyer’s knowledge of the period was so assured that she only needed to mention places, people and events in passing to anchor her work in an accurate historical backcloth. This odd juxtaposition of meticulous accuracy and lighthearted romance is what set her work apart.

Although vastly popular, Heyer herself was rather cynical about her success. Speaking of Friday’s Child in 1943 she said:

Spread the glad tidings that it will not disappoint Miss Heyer’s many admirers. Judging from the letters I’ve received from obviously feeble-minded persons who do so wish I would write another These Old Shades, it ought to sell like hot cakes. I think myself I ought to be shot for writing such nonsense, but it’s questionably good escapist literature and I think I should rather like it if I were sitting in an air-raid shelter, or recovering from flu. Its period detail is good; my husband says it’s witty – and without going to these lengths, I will say that it is very good fun.

This seems a rather dismissive assessment of her work, to say the least. As well as the fascinating details of contemporary dress, manners and social conventions, the intricate historical byways and the little gems of Regency slang (‘You’re dashed well making a cake of me!’ – i.e. ‘you’re making a fool of me’), it is the warmth, humour and wit of Heyer’s work that make her books as captivating and addictive as ever.