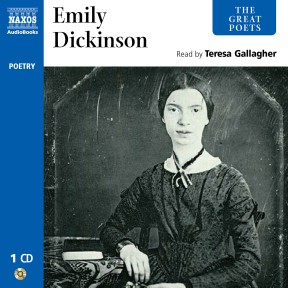 Born in Massachusetts in 1830, Emily Dickinson composed over 1770 poems; but apart from her closest friends, no-one knew she was writing at all. Only after her death was her astonishing output discovered and published. A reclusive figure for much of her life, few could have imagined the range of her subjects, the intensity of her imagination or the powerful delicacy of her writing. Emily Dickinson is one of America’s greatest writers. This selection includes 147 of her best known poems, and is a perfect introduction to her unique voice.

Teresa Gallagher gives Emily Dickinson a New England voice that succeeds in conveying the poet’s distinctive duality: her gentle, mystical other-worldliness underscored by a resolute strength. In these 99 poems, recurring words – sea, Heaven, sun – chime mantra-like, along with the lyrical assonance and rhyme. Dickinson is acutely sensitive to the beauty of light and nature – ‘the colour on the cruising cloud’ – while her metaphors and personification intrigue. Does the ‘door ajar’ shut her out or invite her in? Is the ‘realm of you’ Heaven or some paradise of earthly love? Even though recurrent themes are death and self-denial, the mood is airy and buoyant, like the angel’s wings Dickinson imagines she wears.

Emily Dickinson is remembered as a nineteenth-century New England recluse, but she is reaching a wider audience than she could ever have expected via this Great Poets audio series. A wide range of the poet’s work is here and, as read by the charismatic Teresa Gallagher, the problem of how to turn dashes into pauses is managed with aplomb. To quote the great lady, ‘Beauty be not caused – it is’; and this is beautiful.

Teresa Gallagher has an agile voice and the delicate articulation necessary for interpreting the finely crafted poems of Emily Dickinson. Gallagher performs the poems with a simplicity and clarity that allow their beauty to flourish. However, Dickinson did not title her poems, so Gallagher does not have that convention as a way to mark the beginning of each work. Too often, there is not a long enough pause between poems, and without attention to the liner notes the poems can blur into each other. Nonetheless, the 99 poems selected from Dickinson’s canon of over one thousand are a choice presentation highlighted by Gallagher’s skillful performance. This production is a pleasurable retreat into Dickinson’s imaginary world.

Emily Dickinson is often imagined as a kind of rare, delicate porcelain creation, fragile to the point of untouchability: dressed all in white, fearful of strangers, almost as fearful of friends, living her life like a hermit, hermetically sealed in a New England house, her poems – tiny, fragmentary – being released like wisps of air from someone trying to hold their breath. In part, this image is wholly deserved – she was indeed reclusive; she did dress all in white; she hid when someone she had corresponded with for years came to play the piano. She published almost no works during her life; and that life was essentially hidden from view. As a result, the ambiguity of her poetry is seen as a mirror of her enigmatic life, and the verses seen as gnomic, almost visionary. An enigmatic life is a positive boon to myth-making, of course; and ambiguous poetry maintains the need for critical re-evaluation. But Emily Dickinson’s works have merited their 120 years of attention because of their idiosyncratic place in the history and development of American verse; and the expressive beauty of the poems themselves.

She was born in 1830, in Amherst, Massachusetts, to a wealthy, prominent Calvinist family, with a father who was a lawyer and Congressman. She had an older brother, William Austin (known as Austin; he would later marry one of her dearest friends, Susan Gilbert, and have an affair with another one, Mabel Loomis Todd), and a sister, Lavinia. She was a bright, eager, even exceptional student at the Amherst Academy, and a popular, witty member of her school. But she lasted only a year when she moved on to the Mount Holyoke Female Seminary, and – as with almost every other aspect of her life – the reasons for this are debated. Homesickness? Illness? A refusal to make a public pledge of her allegiance to Christ? Humiliated by the response to this refusal? Whatever the reason, it meant that she was back at home, and her life from then on was centred almost exclusively there. She was not anti-social, though – the local children would come and play in their house, and she enjoyed baking and tending the garden. Most significant, though, is the effort she put into her letters. Her correspondence is as vivid, intimate and profuse as her poetry; and she was a close and loving friend through these letters, which are brimming with fun, interest and in-jokes, advice, concern and passion.

But she started to withdraw physically if not emotionally, becoming more and more the observer of life rather than a liver of it; and even observation became a problem after the mid-1860s, when she was advised on medical grounds not to read or write. She also developed Bright’s disease, a condition that (quite apart from the vomiting, back-pain and fever) can bring on oedema to such an extent that it distends the whole body, and this may well have contributed to her desire for seclusion. Her father died in 1874, and Emily and Lavinia cared for their mother, who had been an invalid from the early 1870s, until her death in 1882. Emily herself died four years later, in May 1886.

When she was going through her sister’s possessions, Lavinia discovered a box. In it were some 900 poems, hand-stitched into 60 small volumes (known as fascicles). Further researches have since brought the total Emily wrote up to an astonishing 1775, the majority written between 1858 and 1865. Three small collections of her work were published in 1890, 1891 and 1896, but these had been significantly corrected by the editors to try and diminish the idiosyncrasies of style and punctuation, to even out the rhythms and normalise the rhymes. But they introduced the public to a voice that had deliberately kept itself silent while alive, and over the next sixty years, more collections were published – with much less editorial intervention – and the myth of ‘The Belle of Amherst’, the solitary versifier, the reclusive porcelain figurine, began to grow.

The curious aspect of this myth is the fact that Dickinson seems to have realised that she was a major poet, but also seems to have decided not to do anything about it, a contradiction evident in the works themselves and her attitude towards them. They are almost all short (several are only two, and many just four, lines long); but these are not simple mottoes. They are intensely delicate, like a tuning fork on a glass rim, but as a result pure and powerful; and because they are so compact and allusive, they are filled with linguistic and emotional ambivalence that is belied by their apparent simplicity. The rhythm is generally that of the common metre hymn-form (a four-beat opening line, followed by a three-beat second one, such as in the beginning of the 23rd Psalm or Amazing Grace); the language initially almost as docile as a homily. But Dickinson is dealing with passions, not platitudes, and her poetry incorporates sudden and unexplained shifts in metaphors, abrupt endings, unexpected images, and the ever-present dash, which could be a comma, an ellipse, a full-stop, a colon or all of them at once, managing to both link and divide the ideas on either side of it. And her themes were the great concerns – life, death, nature and love.

There seem to have been at least two men who were particularly close and significant friends, and several women have been proposed as her lovers as well – but there is no certainty about it. There is a continuing argument over whether the love she expresses in her poetry is the visionary’s for her God or unrequited desire, either heterosexual or lesbian. It is naïve to say that it doesn’t matter, since it clearly mattered to her and to the development of feminist thought, religious poetry and the vast cannon of love poetry generally. But it is also true that it is never explicit, and even those that appear straightforwardly erotic (Wild Nights, for example) can be reread with a metaphorical eye and reveal a completely new interpretation; and one that again is ambivalent. Such uncertainty could diminish the works, making them seem either over-obscure or meaningless; but in Dickinson it allows greater possibilities and potentials rather than limiting them. Both – all – readings are not just valid so much as invited and accommodated together.

The poems flew from her – scribbled on envelopes, on the backs of grocery lists, on scraps of paper – over 360 of them in 1862, according to Dickinson scholar Thomas Johnson; but they were subject to repeated revision, sometimes over a period of years. They looked extraordinary, with almost every punctuation mark reduced to a variation of a dash; but were often meticulously reworked. She took the trouble to bind them, and sent some fascicles to friends – but she never looked for publication. Some poems actually discussed publication and fame; but she quite deliberately did not have any of them circulated. She seemed to know their worth, but did not wish to parade them.

She was writing poetry from her teens and had had a very few poems published anonymously in local papers. Then in 1862, she contacted Thomas Wentworth Higginson (a literary figure who had written for a magazine asking for work from new writers) to ask if he thought her work had any merit. He was sufficiently impressed to continue as her correspondent all her life, encourage her to continue writing, and co-edit the first two volumes of her poetry after she died; although not impressed enough to publish them when she was alive. This seems to be because he recognised their astonishing difference from the standard poetical fare of their time, and also explains why he made so many alterations to the texts in the published works – he wanted them to be acceptable to the average reader. He need not have worried. Dickinson’s work stands comparison with Blake, Shelley, Keats and Shakespeare, as well as Emerson and Thoreau. Her work is unique in its style and expression, and she became a figurehead for the twentieth century as a poet, a woman and an artist: complex, individual and unconventional; passionate, breathing and real.

A note on the text
It is impossible to know exactly when Emily Dickinson wrote all her poems, so arranging them in the order they were written is a matter for conjecture. Some editors group the works according to themes, which can be slightly limiting or misleading, since many works are not just about one thing. Some use the numerical system adopted for the complete works. In this selection, to prevent over-proscriptive editorialising, and to allow some unexpected happenstance of juxtaposition, they are arranged alphabetically by first line (none had titles).