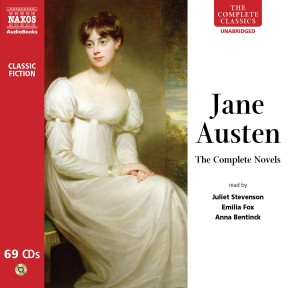 Naxos AudioBooks has long been dedicated to creating exemplary audiobook recordings of Jane Austen classics, employing the amazing vocal talents of Juliet Stevenson and Emilia Fox. Now, for the first time, the entire collection of these perennially popular novels is available as an audiobook box set – providing over 80 hours of compelling storytelling. This magnificent collection includes Austen’s six major novels and recordings of her unfinished novels – Sanditon and The Watsons. Jane Austen – The Complete Novels offers a supremely enjoyable experience of Austen’s novels and is an essential collector’s item. 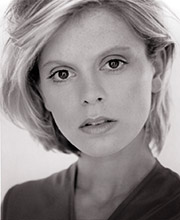 Emilia Fox trained at the Central School of Speech and Drama. Her film appearances include The Pianist, Blink and My Name is Sabina Speilrein. Her television credits include Randall and Hopkirk Deceased, David Copperfield, The Scarlet Pimpernel and Pride and Prejudice. Her Shakespearean roles include Isabel in Richard II and Virgilia in Coriolanus for the Almeida Theatre. She has also been heard on various BBC Radio productions.

Eight hours longer even than Naxos’ complete Sherlock Holmes, this has got to be the audiobook box set of the decade! All six complete major novels are read here in mellifluous and engagingly vital voices which – however many times you listen – instantly draw you into Jane Austen’s world.

Together for the first time, the complete and unabridged audio recordings of Jane Austen’s novels handsomely presented in a boxed set. Counting 69 CDs and running over 83 hours, this is the Holy Grail of Austen audio book recording as only Naxos could present with superb readings by Juliet Stevenson, Emilia Fox, and Anna Bentinck. Included are Austen’s six major novels, the novella Lady Susan and her unfinished novels Sanditon and The Watsons. This is definitely the essential collector’s item. ‘Nuff said!

Top of the boxed sets is Jane Austen: The Complete Novels, read by Juliet Stevenson, Emilia Fox and Anna Bentinck, flaunting alongside the favourites of television drama the less-familiar Northanger Abbey and Lady Susan.

While I haven’t listened to all of them, I listened to the Jane Austen biography, and am finishing up Northanger Abbey as of this post. With a 45-minute commute, these audiobook CDs have become treasured friends. I am always amazed at the talent Naxos AudioBooks gets to narrate their classic releases, and Juliet Stevenson is no exception. She is an accomplished actress of stage and screen, and delivers captivating performances on these discs.

Jane Austen was born on 16 December 1775 at Steventon in Hampshire, where her father George Austen was rector of the parish. Jane was the seventh child, the youngest but one of a talented and enterprising family. Of her six brothers, two inherited wealth from childless relatives, a third was at various times scholar, banker, bankrupt and clergyman, while the two youngest both reached the rank of admiral in the navy. Like herself, Jane’s only sister Cassandra remained unmarried. Together with Cassandra, Jane was sent to good boarding schools in her early years, before continuing her education at home with her father.

The Austens belonged to that upper- middle class which is described in her novels. Its fortunes depended on owning land (to which marriage was often the key) and on the professions. It was respectable, conventional in its manners and had few if any dealings with the aristocracy, which belonged to a different world. To augment his income as rector, George Austen took pupils, and the family circle at Steventon was thereby enlarged. There was plenty of opportunity for the group to create amusements with dances, visits and little dramatic shows which they used to put on inside a barn.

In 1801 George Austen retired to Bath with his wife and daughters. When he died only 4 years later, they went to live in Southampton, where they endured a rather lonely and uncomfortable life until in 1809 Edward, one of Jane’s brothers, lent them Chawton Cottage on the estate where he and his family now spent part of each year. Edward had come into money on the death of Thomas Knight, a wealthy but childless distant relative who had become his adoptive father, and it was this wealth that provided security for Jane, her mother and Cassandra. In Chawton Jane lived happily for the few remaining years of her life, leading a calm and unremarkable existence whose routine was varied by visits from nieces and nephews and by long visits to her brothers in Kent and London. However, much of her life consisted of nothing more exciting than conversation (or, more accurately, gossip), needlework and reading – often aloud, in her own drawing-room or in those of other people. Private dances or balls and occasional visits to fashionable seaside towns would have provided the only real highlights. In spite of having two brothers in the Navy, she makes no references in her work to significant events of the time, notably the French Revolution and the Napoleonic Wars. The period following her father’s death had been largely unproductive, for reasons we can only surmise, but Chawton’s rural setting was very much to Jane’s taste and her writing blossomed there. She was very modest about her gift, describing her work as ‘that little bit (two inches wide) of ivory, in which I work with so fine a brush as produces little effect after much labour’. Her style does not really fit in with much of the literature of the period. This was the time of the Romantic movement, in which writing often took on a more personal feel – something particularly apparent in poetry. Works by poets such as Keats, Byron, Coleridge and Shelley often include references to their own feelings, loves and sorrows, whilst highly imaginative and dramatic Gothic novels were also becoming fashionable. Consequently Austen received some criticism for the more realistic nature of her writing, although writers such as Macaulay, Coleridge and Sir Walter Scott were full of praise for her work.

Her first novel to reach publication was Sense and Sensibility in 1811. Pride and Prejudice followed in 1813 and Mansfield Park in 1814; the last to be published in her lifetime was Emma, in 1816. All these four were published without the name of the author being revealed. The other two novels, Northanger Abbey and Persuasion, were both published soon after Jane had died, through the efforts of her brother Henry, who at the same time formally revealed her authorship of the first four titles. When Sense and Sensibility first appeared Jane was in her mid-thirties, but had already been writing for many years. Her earliest pieces, written when she was just a girl, were for the amusement and entertainment of her family, and she particularly enjoyed penning burlesques of popular romances. A History of England by a Partial, Prejudiced and Ignorant Historian was one of her early, unpublished works and suggests her natural gift for gentle irony. It is thought that the work entitled The Watsons, which Jane wrote as early as 1803, probably provided the basis for Emma.

Our knowledge of Jane Austen’s life and character depends mainly on her letters, of which about 150 survive. Yet interesting as these are, they leave much unsaid. Though the majority are to her sister Cassandra, they were intended for general consumption by all members of the family; in addition, it is certain that all the letters of an intimate nature were destroyed by Cassandra after Jane’s death.

There are some letters to her nieces and a nephew, James Edward Austen-Leigh, who late in his life wrote a short memoir of his aunt. This was published in 1870, and a second edition included three texts that had not previously merited the world’s attention: Lady Susan, The Watsons and brief extracts from the fragmentary Sanditon.

Jane Austen never married although she was reputed to have had several romantic attachments, first to a young man called Tom Lefroy, then in 1802 to a man whom Jane and her sister Cassandra met at the seaside. Unfortunately the latter died in 1803 before he could propose, although in that same year Jane did receive a proposal of marriage from a wealthy Hampshire landowner. She accepted his proposal, only to retract it the following morning.

In 1816 Jane Austen became increasingly exhausted and found it difficult to work. It was clear that she was seriously ill. In May of that year she visited Cheltenham with her sister, but the spa waters there offered little relief and Persuasion was written whilst her health was rapidly failing. Given her habit of reticence in relation to bodily symptoms, the exact nature of her complaint remains a source of controversy. In May 1817 she was taken to Winchester to be under the care of the best doctors. However, within two months of arriving there she died, on 18 July, at the age of 42.