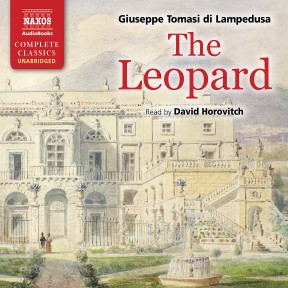 Elegiac, bittersweet and profoundly moving, The Leopard chronicles the turbulent transformation of the Risorgimento, in the period of Italian Unification. The waning feudal authority of the elegant and stately Prince of Salina is pitted against the materialistic cunning of Don Calogero, in Tomasi’s magnificently descriptive memorial to a dying age. Tomasi’s award-winning, semi-autobiographical book became the best-selling novel in Italian history, and is now considered one of the greatest works of 20th-century fiction. It tells an age-old tale of the conflict between old and new, ancient and modern, reflecting bitterly on the inevitability and cruelty of change.

Sicily 1860: Prince Fabrizio has always lived contentedly with the “lovely mute ghosts” of the past. But now, with the impending unification with Italy and his nephew’s undesirable marriage, he fears ruin. This is a beautiful meditation on change, with Sicily and its golden landscape in the starring role. Brilliant.

David Horovitch’s voice, rich in timbre and sepia in tone, is wonderfully paired with this masterpiece, a tale of degeneration and ruin. Like the declining House of Salina itself, Horovitch’s presentation possesses a certain ‘shabby grandeur’ that acquires a suitably obnoxious edge in conveying the vulgarity and ruthlessness of those who are tearing down the old order with the help of upstart money, main chance and relentless ambition.

Even through the most active scenes, David Horovitch always projects a hint of the elegiac tone that suffuses this novel. Published in 1958, Lampedusa’s story recounts the changes in Sicilian culture that took place during the violent Italian unification of the mid-1800s. Listeners, many of whom might know nothing of mid-18th-century Sicily, will feel the strains of change – the one constant aspect of history. Most of the book is told from point of view of Fabrizio, a nobleman, and Horovitch’s voice makes him gruff and cultured, noble with an edge of barbarism. We feel the prince’s conflict between his love of his own past and his appreciation for the possibilities of the newly unified Italy.

In his bougainvillea-covered villa five hours by cart from Palermo, Prince Fabrizio faces change, even annihilation, as Garibaldi is about to hand over the whole of the Two Sicilies to King Victor Emmanuel to make a united Italy. The Prince meditates on change and growing older, seeing his future only too clearly with ‘beslobbered pillows and a pot under the bed’. Nevertheless the sensuous whole sparkles with colour and imagery: the ‘tyrannous sun’, the ‘yellow cheeks’ of peaches, the dogs ‘as passive as bailiffs’. Every listening yields more. Wonderful.

Italy’s best-loved novel, Il Gattopardo (‘The Leopard’), is a delicate, modulated, subtle work, understated and thematically rich. It incorporates within its love-stories and histories a tale of decay and rebirth, of change and stagnation, of the passing of the old ways and the inevitable triumph of the new. While it illuminates the life and world of Sicily between 1860 and 1910, each episode and description has a symbolic subtext, or a broader implication, that gives the story a resonant, universal appeal. The work of a Sicilian prince, Giuseppe Tomasi di Lampedusa, it was published posthumously in 1958 and became Italy’s greatest international bestseller.

The Risorgimento
For nearly 50 years before The Leopard begins, Italy had been struggling for nationhood. The country was very broadly divided into four states, each with its own governors. In the north-west it was ruled by the native Piedmontese under their king, Victor Emmanuel II. Austria governed the rest of the north, including Venice, and had great influence beyond that. In the central regions, including Rome, the Papacy had control. In the south, including Sicily, the French Bourbon king Francis II was the ruler. But after successful uprisings and political manoeuvrings in the north-west drove out the Austrians, Victor Emmanuel II became the figurehead for unification, a movement that became known as the Risorgimento (‘Resurgence’).

In 1860 the popular general Garibaldi sailed with a thousand volunteers to liberate Sicily, taking the fight across to the mainland, deposing the Bourbons and eventually joining Victor Emmanuel’s forces that had defeated the Pope’s army. Once Garibaldi had succeeded in Sicily, there was a plebiscite (as there had been elsewhere) to determine whether the people wanted to join this new nation. The Leopard opens at this point in the country’s history and is set in the household of a Sicilian aristocrat, Don Fabrizio Corbera, Prince of Salina. The character is based in part on the author’s great-grandfather, Giulio Tomasi di Lampedusa, but also, in certain respects, on the author himself.

The Author
Born in Palermo, the capital of Sicily, in 1896, Giuseppe Tomasi di Lampedusa was the last of a long line of Sicilian nobility and was able to live a life of some ease and leisure, despite his family’s declining fortunes. His father wanted him to study law, as a means of eventually working in the diplomatic service, but Giuseppe himself preferred the world of the arts, and literature in particular. His mother was more sympathetic but Giuseppe did as his father wished, only to have his studies interrupted by the outbreak of the First World War. He joined the army and was involved in some very bloody fighting between Austria and Italy before being captured and sent to a Hungarian Prisoner of War camp. He escaped, and continued to serve until he was demobbed in 1920. It was already becoming clear, however, that his attitude to the fighting, indeed to several aspects of Italian political and social life, was not that of the ruling class. He was to become – despite his noble background – an outsider, an observer, a thinker; if not politically engaged, then intellectually questioning of both the past and the present.

He contracted
lung cancer,
and died in
1957 before
the book
was published

After the war he travelled widely, if rather aimlessly, through northern Italy and Europe, including England where his uncle was an ambassador. It was here, in 1925, that he met the woman who would become his wife, Alexandra Wolff Stomersee (known as Licy), a Latvian student of psychoanalysis. They eventually married in 1932, although it is not clear how happy the marriage was. Certainly they did not spend all their time together; Alexandra was not comfortable in Sicily and frequently returned to her own family’s estate in Riga. This may have been in part because of a very strained relationship with Giuseppe’s mother.

Giuseppe himself might be said to have fallen as much for the country where he met his bride as for the bride herself. He loved England’s landscape, the hunting, the culture and the literature. But this was a dangerous passion. In the Italy of the 1920s and 1930s, the Fascists were gaining power, and they regarded any intellectuals who were not of their stamp as a threat – and those who had a fondness for England were especially suspect. But Giuseppe was nothing if not low-profile: despite the depth of his learning he had only published a few articles, in a Genoese journal. As a result, the authorities in Italy seemed to pay him little attention, even when his father died in 1934 and Giuseppe Tomasi became Prince of Lampedusa. This did not in fact mean a great deal; but he did inherit the family’s estates in Sicily.

He was called up in the Second World War but was released after just two years, spending the remaining war years with his family in a town on the coast to the east of Palermo. But even their sheltered lives were affected. The familial palace in the capital was destroyed in Allied bombing raids, and Licy found her homeland overtaken by the Russians. Then in 1946 Giuseppe’s mother died. Although his father’s aloofness and forbidding attitude might have been detrimental to Giuseppe’s career plans, his mother’s powerful influence may well have been a more substantial block to his development as a writer, just as it was to his marriage. With her death, it seems he was able to take a slightly more active part in the literary world he loved, indeed in life itself, going to poetry festivals and becoming a private tutor to a group of students at Palermo University. One of the students, Gioacchino Lanza Tomasi, was a cousin whom he legally adopted in 1954. He and Licy had no children of their own.

It was in the following two years that he wrote The Leopard, a story (at least superficially) about his great-grandfather’s reaction to the Risorgimento. But he had contracted lung cancer, and died in 1957 before the book was published.

His inherent diffidence, a depressive nature, the weight of his mother’s authority, and his love of art and the abstract are some reasons why Giuseppe Tomasi di Lampedusa might be charged with never fully engaging in the world of the 20th century. But another cause was his social position. His titles were hollow symbols – the family had not owned the island of Lampedusa for a century before he came into the title, and the status of the nobility as a whole was violently eroded during his life. His was an inheritance already dissolving; the values and expectations of a moribund social elite were no longer relevant or possible. Like the principal character in his novel, he was watching his own world dying. But in recording the end of that world through the lens of an earlier one, he crafted a work that can sit alongside the novels of Jane Austen and Marcel Proust.