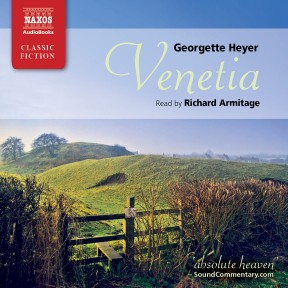 Venetia Lanyon, beautiful, intelligent and independent, lives in comfortable seclusion in rural Yorkshire with her precocious brother Aubrey. Her future seems safe and predictable: either marriage to the respectable but dull Edward Yardley, or a life of peaceful spinsterhood. But when she meets the dashing, dangerous rake Lord Damerel, her well-ordered life is turned upside down, and she embarks upon a relationship with him that scandalises and horrifies the whole community. Has she found her soul-mate, or is she playing with fire? 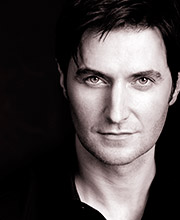 Venetia reader Richard Armitage discusses his experience of reading an audiobook and where he gets his inspiration from.

Venetia, a classic regency romance, is set in early 19th century rural England, one fine summer and autumn. Unmarried 25-year-old Venetia, kept isolated by an eccentric father on an estate in Yorkshire, has limited experience with the world outside her home. Still she is intelligent, capable, charming and knows her own mind. What she knows about the world beyond her neighborhood has been gained from books and from what her brothers have shared with her. While her older brother Conway, a soldier, is still off in France she is in charge of running the family estate and caring for her frail, younger brother Aubrey, soon to go off to Cambridge. When Aubrey is injured in a fall from a horse, he is rescued by a mature rake, Lord Demerel, whose reputation in society is not of high standing. As the journey back to his home would be so painful for Aubrey, Demerel kindly encourages the youth to stay at his estate to recover. Venetia visits. Demerel and Venetia converse and spar and a mutual attraction grows. The strikingly beautiful Venetia does not lack for suitors who very much want to marry her but she has not found one that she loves enough to marry, until Demerel. All does not go smoothly, of course, as their friendship develops. Heyer’s detailed descriptions of the day-to-day activities of these folk are historically accurate and realistic. Heyer is elegant, suggestive, and genteel with classic allusions and cautious, most articulate, conversations.

British actor Richard Armitage’s reading one of Georgette Heyer’s best classic regency romances, combined with Naxos technical expertise and most appropriate musical interludes is absolute heaven. Fans of Armitage having recently watched his cool, aloof, calculating Lucas North on the British television series Spooks (MI5 in the US) or his villainous role in Robin Hood and pining for more a romantic Armitage as he was as John Thornton in the BBC production of Gaskell’s North and South will find his performance here breathtakingly satisfying, honoring and respecting Heyer’s words, characters and setting as he does so perfectly.

Armitage’s fully-voiced performance is simply amazing and listeners will only regret that he did not read the entire text instead of an abridgment, albeit, an excellent abridgment. From 25-year-old Venetia, through middle aged and dowager women, to the youthful Aubrey, to Venetia’s annoying suitors, to Demerel, chameleon Armitage captures them all; and it is difficult to believe that one man is playing all these characters so flawlessly. Occasionally, clearly intended by Heyer’s words, some of these women’s voices are ridiculous and amusing and Armitage captures that as well. Listeners will smile as some sound, deliberately, almost Monty Pythonesque. Listeners will also agree that Armitage should play Lord Demerel if a film is made.

The Naxos package includes a most useful booklet that provides enlightening historical and author background information by Caroline Waight, lists chapter details for each CD, and provides music sources, also available from Naxos in full. Listeners might also want to check out the excellent Naxos audiobooks website for the charming article ‘Swooning over Sylvester’ about Armitage’s recording of Sylvester also by Georgette Heyer (reviewed in SoundCommentary, August, 2009). Venetia deserves 5 stars.

Editor’s Pick of the Month (May 2010) – Truly Outstanding Audio!

Heyer’s elegant story of a country girl who falls for a rakish peer of the realm will enchant listeners. Venetia’s chance meeting with Damerel turns into a romantic dilemma as she tries to convince him their relationship won’t turn her into a social outcast. Richard Armitage’s voice aptly conveys the attraction between Venetia and Damerel, making the most of the novel’s rich dialogue and clever turns of phrase. Armitage manages to express all of Heyer’s opinions about her characters with a subtle sense of the ridiculous. Exchanges between Venetia and Damerel emerge as especially intimate and wonderful. While the abridgment is gracefully handled, it’s a pity listeners won’t have the pleasure of hearing Armitage narrate the entire novel.

The spectre of the Napoleonic Wars loomed large over the first decades of the nineteenth century. Even after the Treaty of Paris was signed on 20 November 1815 and military hostilities were brought to a close, an army of occupation remained in France until the end of 1818. The events of Venetia take place in the autumn of that year, and the soldiers’ continued presence in France is an essential part of the historical backcloth of the novel. Venetia’s brother, Conway, long overdue to return home to Yorkshire, is described as being a member of Lord Hill’s staff. Rowland Hill, 1st Baron Hill (1772–1842), later Viscount Hill, is mentioned several times in the novel – he was the Duke of Wellington’s second-in-command, and he stayed in France until the eventual withdrawal of troops.

As is often the case with Georgette Heyer’s work, references such as these are woven so deftly into the fabric of the book that they pass almost unnoticed. Heyer’s knowledge of the Regency period was extensive, but she wore her erudition lightly. For example, the Russian Tsar Alexander I’s (1777–1825) visit to England, which took place in June of 1814, is mentioned only fleetingly by Venetia, and yet it marked a pivotal moment in European history. Not only the Tsar, but King Frederick William III of Prussia (1770–1840), the eminent Austrian statesman Prince Klemens von Metternich (1773–1859) and a number of other well-known political and military figures gathered in London to celebrate the abdication of Napoleon on 11 April.

Venetia was published in 1958, when Heyer was at the height of her popularity. It bears all the hallmarks of her best romances, being witty, charming and brimming with historical insight. In the character of Venetia herself, Heyer created one of her most memorable heroines. Determined, intelligent and kind, Venetia is an independent, likeable protagonist. Although not scholarly like her precocious brother Aubrey, she is clearly well-read, and her verbal sparring with Lord Damerel is permeated with literary references. Shakespeare, in particular, is repeatedly quoted by both Venetia and Damerel, and their ability to communicate in this manner indicates the affinity and understanding between them.

Their very first interchange illustrates this point. Damerel’s words ‘But beauty’s self she is’, spoken just before he kisses her, hint at his intentions. The full poem – an anonymous seventeenth-century verse – is as follows:

Venetia’s response is equally improper, alth-ough unintentionally so. She insults Damerel with Iago’s words from Shakespeare’s Othello, when he refers to Cassio as ‘a pestilent complete knave’. When Venetia remembers the context she is embarrassed, because Iago continues with ‘and the woman hath found him already’, by which he means that Desdemona has already committed adultery with Cassio. Damerel says that he does not know this quotation, but moments later he quotes from the same play (‘My reputation, Iago, my reputation!’), indicating that he recognises it after all. He then makes a similar mistake in describing Venetia’s lips by quoting from Thomas Campion’s poem ‘There Is a Garden in Her Face’ – as she points out, the line ‘They look like rosebuds filled with snow’ is followed by the admonition ‘Yet them nor peer nor prince can buy’. By the time they part, they have already fallen into the informal, bantering way of speaking to each other that persists throughout the novel.

Near the end of the book, when Venetia returns to the Priory to persuade Damerel to marry her, she again uses her knowledge of Shakespeare to charm him, paraphrasing Viola’s depiction of unrequited love in Twelfth Night: ‘I warn you, love, that if you cast me out I shall build me a willow cabin at your gates – and very likely die of an inflammation of the lungs, for November is not the month for building willow cabins!’ Venetia’s humour playfully undercuts the romantic passion of the original words (‘Make me a willow cabin at your gate, / And call upon my soul within the house’). Damerel, too, finds himself inspired to poetry by Venetia, comparing her to the celebrated beauty Lady Venetia Digby (1600–1633), who was immortalised by Ben Jonson in his poem ‘Eupheme’, and described by John Aubrey as a ‘beautiful, desirable creature’. Twice, Damerel uses Aubrey’s words to describe Venetia, and also quotes from Jonson’s poem, saying: ‘Sweet Mind, then speak yourself.’

Literature is often a prominent theme in Georgette Heyer’s novels. She inherited a love of books from her father, George Heyer; and two of her closest childhood friends, Carola Oman and Joanna Cannan, with whom she spent many hours discussing literature, both grew up to be authors. Heyer herself showed promise from an early age, writing her first book, entitled The Black Moth, at the age of 17. It was published, with George Heyer’s help, in 1921, initiating a steady stream of novels. In 1926 Heyer had her first major success with These Old Shades. By this time she had been married for a year to a young mining engineer named Ronald Rougier, and had already published five books.

From 1932 until her death in 1974 Heyer produced novels at the extraordinary rate of almost one a year, spawning a new literary genre – the Regency romance. Yet despite her undeniable success, she was frequently beset by financial problems. In the 1950s and 60s her limited liability company Heron Enterprises found themselves in trouble with the tax authorities, and a large chunk of the profits from books written around this time went towards paying back money to the Treasury. Plagiarism also became a problem – from the 1950s onwards several other writers traded on her popularity by writing novels using names, phrases and events from her books. She was even accused by some of her fans of publishing sub-standard work under a pseudonym. Although Heyer sought legal advice on several occasions, she never chose to sue.

Venetia is a product of these troubled years, yet no trace of them is left in the novel, which sparkles with all the energy, intelligence and wit of her finest work.