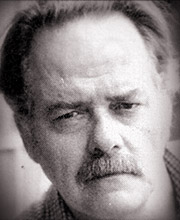 Bill Bailey was born and raised in North Carolina, USA, and moved to the UK more than twenty years ago. He has appeared many times in London’s West End and with the National Theatre. UK TV credits include such classic English series as Poirot, Jeeves and Wooster, Drop the Dead Donkey, Yes Prime Minister, and as a regular in the BBC 2 series Tygo Road. His feature films, both in the UK and Hollywood, include Superman II, Yanks, The Omen, Ishtar, Reds and Haunted Honeymoon.