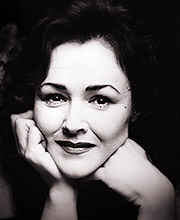 Frances Barber is well known for her roles in films such as Prick Up Your Ears, Sammy and Rosie Get Laid and Young Soul Rebels. Her TV performances include Inspector Morse, Hancock and The Ice House. After an Olivier Award for Most Promising Newcomer in 1984, she went on to win acclaim for many theatrical roles including leading roles in Pygmalion and Insignificance.