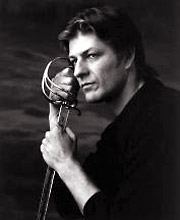 Sean Bean is known for his major roles in films such as Goldeneye, When Saturday Comes, Patriot Games and Anna Karenina, and for his TV roles in the Sharpe series, Lady Chatterley, Clarissa and A Woman’s Guide to Adultery. His theatre credits include Romeo and Juliet and Fair Maid of the West for the RSC.