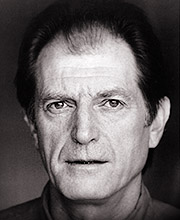 David Bradley won an Olivier Award for Best Supporting Actor for the role of The Fool in King Lear and other awards for his extensive work for the Royal Shakespeare Company, which has included roles such as Cassius in Julius Caesar, Polonius in Hamlet and Mephistopheles in Dr Faustus. He has been seen on TV in Our Friends in the North, Cracker, Band of Gold and Reckless.