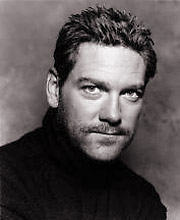 Kenneth Branagh, a leading figure in film, TV and on stage, is equally at home with classic and contemporary subjects. However, as director and adaptor, he has made a particular contribution to Shakespearean performance with his films such as Much Ado About Nothing, Henry V, Hamlet and Love’s Labour’s Lost. His productions of Shakespeare in the theatre have included: Henry V, Hamlet and Love’s Labour’s Lost (RSC), Romeo and Juliet (Lyric), As You Like It, Hamlet and Much Ado About Nothing (Renaissance), A Midsummer Night’s Dream and King Lear (World Tour) which he also directed, Coriolanus (co-production with Chichester Festival Theatre). He has also played Iago in Oliver Parker’s film Othello. Among his other films are: Mary Shelley’s Frankenstein, Peter’s Friends and Theory of Flight. He has won numerous awards for his work on stage, film and TV as actor and director. He has also recorded King Richard III and King Lear for Naxos AudioBooks.