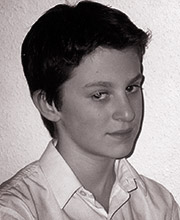 Raphael Clarkson was born in London in 1987. He played key roles in two theatre productions while still in primary school – as Lionel Grossman, food critic, and as Dracula. He has also played a child in the ENO’s production of Massenet’s Don Quixote and Liszt as a child for Naxos AudioBooks. A trombonist and jazz pianist, he is also a keen footballer.