Classical Music across the Continents

For the last three weeks I have been in North East India, travelling through Uttar Pradesh and Bihar. Generally, this means that the only music one hears is unbelievably loud Indian pop music, especially when travelling on the buses. If you have seen Slumdog Millionaire you will get the meaning though you still have to have the experience for true lasting effect.

These inter-city buses want to entertain their passengers (though one only has to look around!) so it is de rigeur to have a video machine playing Bollywood movies end to end at an EXCRUCIATING volume. From Rajgir to Bodh Gaya I made the bad mistake of sitting near the front, close to the speakers. No chance of moving as the aisle as well as the roof and the back window bracket were full. It is a two hour journey.

I didn’t think much about Josef Haydn’s String Quartets then, nor during the two Indian classical concerts I had the good fortune to hear on my travels.

The first one was in Sarnath, rather curiously in Dr Jain’s Paying Guest House (v. clean, v. basic, 250 rupees a night and it has my unreserved recommendation).

Dr Jain (with the help of an American sponsor) has started free schools for the village children who otherwise would not get an education.

The sitar player and the tabla player sat on an improvised platform in the lobby/dining room and we all crowded around as best we could. They had just come from recording a concert for All India radio in nearby Varanasi – rather different circumstances! – but here they were playing to support the schools project.

It was exceptionally good and the chamber environment only intensified the event.

The second concert was in one of those massive Indian tents accommodating 500 and more on a plot of land on the edge of Bodh Gaya. It was the concluding programme in a week’s convention: a star tabla player with a sarangi player (a soulful bowed instrument played a bit like a cello, though the musician is sitting on the ground. 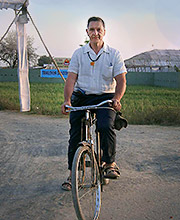 After one bus too many, I took to the road…

In the West, we normally think of the tabla player as accompanying the sitar. But here it was (generally) the tabla that took the lead. It wasn’t just the complex rhythms that held everyone mesmerised but a growing awareness of the hugely varied consonants and vowels which coloured and shaped the sound. If only the musician’s verbal and instrumental explanation had been recorded! It has changed the way I will listen to the tabla in the future.

I am still in Bodh Gaya as I write this and have the atmosphere of the final raga in my mind. But for this March blog I need to turn my attention to Haydn.

What Haydn would have made of the remarkable improvisations integral to Indian music we will never know.

I bet he would have listened with approving amazement. He was himself an improviser as all musicians of his era were expected to be. His well-attested generosity of spirit would have leapt any cultural gap with ease. By contrast, I am not so sure about Beethoven.

This year we are marking the 200th anniversary of Haydn’s death with the complete symphonies, quartets, oratorios, and much more on Naxos, our parent label, and I cannot recommend too highly Jeremy Siepmann’s audiobiography, which looks at all the key aspects of Haydn’s Life and works, illustrated with long excerpts of music.

It is part of his Life and Music series available from Naxos AudioBooks on CD or to download… they are all both informative and entertaining.

Jeremy also reads Discover Music of the Romantic Era, written by David McCleery which again with words and music, charts the development of Western Classic music in the nineteenth century.

To listen to Haydn quartets is a joy at almost any time… but I didn’t feel I could listen to them as I travelled around India.

However, tomorrow I will have a 12 hour train journey from Bodh Gaya to Delhi before boarding the plane for London… so I think I will don my Bose noise cancelling headphones, turn on my iPod and start with Jeremy’s portrait of Haydn. It will be the proper preparation for a treat I have promised myself this year – listening to all the quartets.