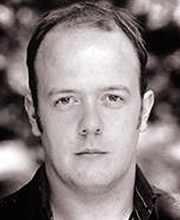 John Cummins trained at RADA. His stage credits include Romeo and Juliet (winning a JMK Award in 2007) for The BAC, The Reporter and The Alchemist for The National Theatre, The Beaver Coat for The Finborough Theatre, and 2000 ft Away and The Strindberg Project for The NT Studio. BBC Radio Credits include To Sicken And So Die, A Fare To Remember, Agatha Rasin, Clare in the Community, and Troilus and Cressida. John won the Carlton Hobbs Award in 2005.