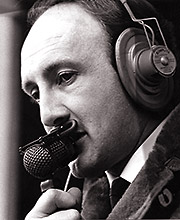 Barry Davies began broadcasting with British Forces Broadcasting Services as a National Services officer in the Royal Army Service Corps. On leaving the army he worked for BBC radio (where he met his future wife, Penny) and then at The Times before being chosen by ITV for the 1966 World Cup held in, and won by, England. His first football commentary was Chelsea against A C Milan in February 1966. He covered his first Olympic Games with ITV in Mexico City in 1968 and joined BBC TV a year later. He has covered ten World Cups, ten Olympic Summer Games, seven Olympic Winter Games and seven Commonwealth Games. He has commentated on many sports and events over the last forty years: from football to Olympic opening ceremonies; hockey to rowing; figure skating and ice hockey to gymnastics; Wimbledon to the Boat Race; to the Lord Mayor’s Show and the last Royal Tournament. He lives happily in Datchet in Berkshire with Penny (formerly British Airways Crew). Their daughter Giselle is the Director of Communications at the International Olympic Committee and their son Mark is the Managing Director of Betfair. Barry was awarded the MBE in 2005.