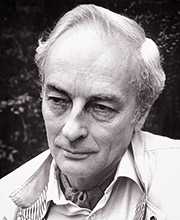 Hugh Dickson is a former member of the Royal Shakespeare Company and the BBC Radio Drama Company. He has specialised in verse-speaking, working with many leading poets on radio, platform and recordings. Stage appearances include Escalus in Measure for Measure and Prof Riley in Shadowlands. Radio work includes Camillo in The Winter’s Tale and Guy Crouchback in Sword of Honour. He has also read the part of  the Archbishop in Henry V  and the part of Lucretius in The Rape of Lucrece for Naxos AudioBooks.