‘I love listening to radio plays – it is like theatre of the mind.’ This is probably the most used comment on radio drama, and we all know exactly what it means. Radio drama/audiobook drama is, on the face of it, a rather odd beast. People seem to enjoy listening to plays through headphones or the radio speaker almost as much, it seems, as going to the theatre, which is very odd for an essentially visual medium.

But I know exactly what they mean. This week, I have immersed myself in Arthur Miller. I have listened to The Price (Timothy West in a surprise role as an American Jewish furniture appraiser), The Ride Down Mount Morgan (Brian Cox, a true star of radio as well as the big screen) and now A View from the Bridge… and they are stunning.

They are all recordings by the enterprising if idiosyncratic Los Angeles Theatre Works directed by Susan Loewenberg which still pursues its own special recording process: two performances in front of a live audience are recorded and mixed with one studio performance. Not the BBC Radio way, to be sure, but I must say the LATW achieves some engaging and immediate productions with leading audio stars: Martin Jarvis himself spends a lot of his time in LA, and frequently appears on their productions.

I can only recommend that you to search out LAWT if you like Arthur Miller – woefully neglected in his own country, and, maybe, slowly disappearing here. The easiest route I found is via a download from www.audible.co.uk. 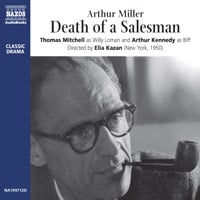 This month we release masterpiece, Death of a Salesman, but in the historic radio recording made in 1953 directed by Elia Kazan starring Thomas Mitchell as Willy Loman and Arthur Kennedy as his son Biff. It is a slightly strange adaptation for 1950s radio, made to fit in with the accepted radio timings… so, don’t sit there with the script.

But if you sit in front of the speakers and close your eyes, you are in for a real treat – there are some mesmerising characterisations. The sheer power of the play has an almost physical effect, perhaps just because we are not distracted by visuals and it is all in the mind. We can hear the torment, the pressure, the flawed aspirations, the self-delusion – oh, so very clearly!

Radio/audio drama is really a marvellous medium. We have done a number of full dramas on Naxos AudioBooks (hang the expense!), including 11 Shakespeares and an extremely fine Hedda Gabler from Juliet Stevenson and Michael Maloney – check it out, I urge you…).

So I know the fun, the complications, the (occasional) tensions… the balance of a fine theatrical performance brought down to radio/audio size. And the sleight of hand: a small adjustment of script to announce the fact that someone is looking in through the window, or that a letter has fallen on the ground; or the subtle audio cue, of a kiss or the moon rising…. 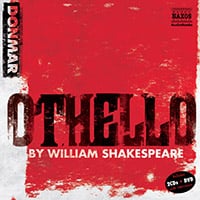 I also remember Michael Grandage, director of the Donmar Warehouse, one of the most enterprising of London theatres, say that he would rather have an audio production of his plays as a record than a video production. Audio, he felt, was more truthful to the essence of the play and the production than a bald video, he said. Which is why he proposed to us the joint production of his award-winning Othello on audiobook. I can say (without false modesty) that it is one of the finest audio productions of Shakespeare ever recorded.

The rub of the matter is that audio drama is expensive, costing as much as three times a regular audiobook to produce… and as most plays are contained on three CDs, and rarely sell higher numbers than a normal audiobook, the decision to go ahead, commercially, is a difficult one.

There is, however, a vast archive of exciting historic radio drama, if only one can get to it – and not just from the revered BBC Radio! In the US, from the 1940s until the late 1950s and even into the 1960s, radio was massively popular… and the great stars, like Orson Welles, Humphrey Bogart and Lauren Bacall, would make a film and then go and record an audio version. They too knew how to work with just a microphone in a studio!

And one must not forget that were many other strands of radio drama in those days, from The Lone Ranger and Hopalong Cassidy to The Shadow, Superman and other champions against crime. They can be great fun too… in any of the Western series, you will come across more coconuts than in a week’s holiday in the Caribbean.

We already offer some key classics of the radio past: John Gielgud’s Hamlet and The Importance of Being Earnest, the premiere radio production of Murder in the Cathedral and key productions of The Playboy of the Western World and The School for Scandal with Dame Edith Evans.

Pride of place, however, must be taken by the greatest original radio play of all time, an occasion where an electric performance unerringly matched a remarkable text: Dylan Thomas’s Under Milk Wood. The first 1954 recording of this work, featuring Richard Burton and Richard Bebb as the narrators and a wonderful Welsh cast including Hugh Griffiths as Captain Cat (this recording is not to be confused with the later and not quite up-to-the-mark recordings of the play by Burton) remains for me the shining beacon of audio drama.

You can listen to Under Milk Wood on Naxos AudioBooks either on its own or in the context of earlier plays by Dylan Thomas (Quite Early One Morning and Return Journey to Swansea), in which you can see how the seeds for Under Milk Wood (genius though it was and is) were sown.