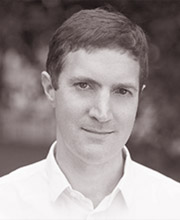 Kris Dyer is an actor and writer who has performed all over the UK, including in three sell-out runs at the Edinburgh Festival as one half of comedy double-act Nice Mum. He created, wrote and appeared in three series of the BBC radio sitcom On the Blog starring Caroline Quentin and has written for Richard Herring and John Sessions. He is an award- winning voice actor and has narrated over 200 audiobooks.

Titles read by Kris Dyer
The Beast in the Jungle (unabridged)