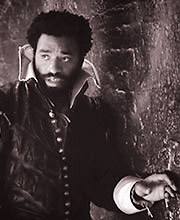 Two-time Golden Globe Award nominee Chiwetel Ejiofor, OBE, is a prominent British film and stage actor. His film credits include Dirty Pretty Things, Love Actually, and Kinky Boots, and in 2008 he was awarded the Laurence Olivier Award for Best Actor for his performance in the Donmar Warehouse’s production of Othello.