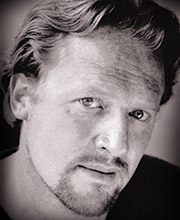 Daniel Flynn has worked extensively in film, radio, TV and theatre for the last twenty-five years. His many theatre credits include principal roles at the Royal National Theatre, the RSC, the Royal Court and the Donmar and at the time of this recording he was about to embark on a national tour followed by a West End run at the Haymarket of Robert Bolt’s A Man For All Seasons, in which he was playing the role of Henry VIII.