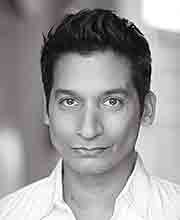 Raj Ghatak is an experienced actor on stage, screen and radio. He won a Best Actor Award for his role of Amir in The Kite Runner, and was nominated for Best Actor and Best Supporting Performance in a Musical for playing Sweetie in Bombay Dreams. Raj has performed at The Royal Court Theatre several times, and worked internationally too. His screen credits include Disney’s Christopher Robin, Mrs Brown’s Boys D’Movie, BAFTA-winning Dead Set, Eastenders, The 7.39 and BAFTA-nominated Hetty Feather.