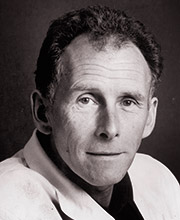 Christopher Godwin worked extensively for Alan Ayckbourn in the seventies. At the RSC he played in The Relapse, The Devil is an Ass and Woyzeck. Plays in the West End include Hay Fever, Noises Off, School for Scandal, What A Performance and two seasons at the Open Air Theatre, Regent’s Park (including the role of Malvolio).