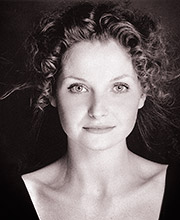 Fritha Goodey trained at LAMDA. She appeared in Mark Ravenhill’s Some Explicit Polaroids at the New Ambassadors and in Pinter’s Remembrance of Things Past at the Royal National Theatre alongside Romeo and Juliet. TV includes Hearts and Bones, A Case of Evil, Table 12, Roger Roger and Dr Willoughby. Films include About a Boy, The Red Phone, and Bookcruncher. She was also in BBC Radio’s After the Funeral.