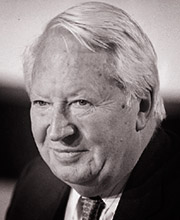 Sir Edward Heath was Prime Minister of the United Kingdom from 1970–74 and Leader of the Conservative Party from 1965–75. In 1992 the Queen appointed him a Knight Companion of the Most Noble Order of the Garter.