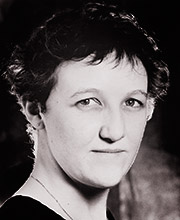 Joyce Henderson trained with Jacques Lecoq in Paris. Her theatre credits include, for the Royal National Theatre: The Street of Crocodiles (Theatre de Complicite) and Volpone; Others: Wallace and Gromit in a Grand Night Out. Film and TV credits include Peter and the Wolf (Spitting Image) and Stella Does Tricks.