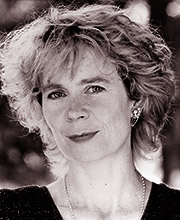 Celia Imrie’s theatre work includes seasons with the Glagow Citizens, the Royal Court and Chichester. At the National Theatre she appeared in School for Wives, Yerma, and The Sea for which she won the Clarence Derwent Award for Best Supporting Actress. She played Mrs Candour in School for Scandal for the RSC. Her numerous television appearances include programmes with Victoria Wood, The Riff-Raff Element and Gormenghast. Films include Highlander and Hilary and Jackie.