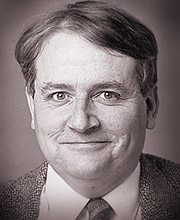 Canadian-born Kenneth Jay trained at Ryerson in Toronto but has lived and worked in the United Kingdom since 1983 where his theatrical career has ranged from weekly rep to national tours of Witness for the Prosecution, Noises Off, and Adam’s Dream. Numerous West End appearances include The Boys Next Door and Indian Ink. He has also toured Europe with The Imaginary Invalid and I Ought To Be In Pictures. Film and television includes Emmerdale, The Bill, Happy Birthday Shakespeare, Cousin Bette and Hotel.