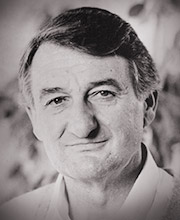 Peter Jeffrey has played Ulysses in Troilus and Cressida and Falstaff in The Merry Wives of Windsor for the Royal Shakespeare Company as well as numerous roles for the Royal National Theatre and the West End. On TV he has appeared in The Prince and the Pauper, Our Friends in the North, Middlemarch and A Village Affair.