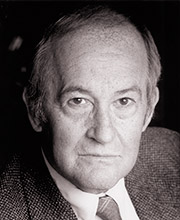 Charles Kay trained at RADA. He joined the RSC in its early days to play Clarence in Peter Hall’s Wars of the Roses and stayed with the company for four years, after which he joined Olivier’s National Theatre at the Old Vic for six years appearing in As You Like It, Danton’s Death, Three Sisters and The National Health. Seasons at the Royal Court appearing in The Wesker Trilogy, The Kitchen, The Changeling and Luther. West End theatre appearances include The Homecoming, The Scarlet Pimpernel and The Woman In Black. TV credits include The Duchess of Malfi, Fall of Eagles, Loyalties, Serve Them All My Days, My Cousin Rachel, Edge of Darkness, Kind John, Fortunes of War and Darling Buds of May. Films include Amadeus, Henry V, Beautiful People and The Importance of Being Earnest.