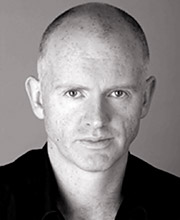 An award-winning narrator, Aidan Kelly appears regularly in theatre and television, most notably at the Abbey Theatre, Ireland’s National Theatre. Other recent work includes the musical Once in the West End, Salomé and Treasure Island at the National Theatre, UK, and the title role of Macbeth at the RSC. Recent TV includes No Offence for Channel 4, Warrior for HBO and Killing Eve for BBC.