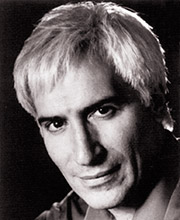 Jack Klaff’s theatrical roles have included Foppington, Trigorin, Atahuallpa, Gulliver, di Maggio, Macbeth, Iago and Theseus/Oberon. On film he can be seen in Star Wars, King David, 1871 and Pasternak. His radio work stretches from the Sea Wolf and Oscar Wilde to Quasimodo. Television appearances include Road Rage and Vanity Fair as well as his own plays. He is a prolific author and solo artist.