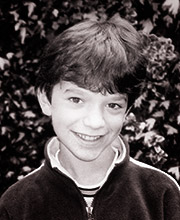 Dominic Kraemer studies music at the Purcell School and is a member of the Finchley Children’s Music Group. He has appeared in Joy to the World, sung in Britten’s St Nicolas as well as in the chorus in Carmen, The Nutcracker (ENB) and Wind in the Willows (NT); he was Eyolf in Little Eyolf at the RSC and Charlie in Charlie and the Chocolate Factory at the National Theatre Studio. He appeared in the 2000 Royal Military Tattoo and at the Queen Mother’s 100th Birthday Pageant at Horse Guards Parade.