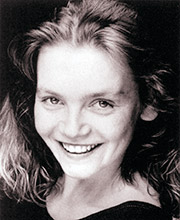 Pauline Lynch trained at Rose Bruford College. She played Lizzie in Trainspotting and has appeared in A Mug’s Game and Soldier Soldier on TV. Among her theatre work has been the role of Mary MacGregor in ThePrime of Miss Jean Brodie.