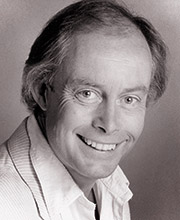 Ian Masters has worked in radio, television and theatre for over thirty years. From the Welsh College of Music & Drama he went to regional reps and then into the West End where he played the lead in No Sex Please We’re British. Other West End productions include Noises Off, The Last of Mrs Cheyney, and Conduct Unbecoming. On television he has played parts as diverse as Birdman in Red Dwarf to Siegfried Sassoon in Fatal Spring. Films include Jigsaw Man, Telling Tales, and Pathfinders.