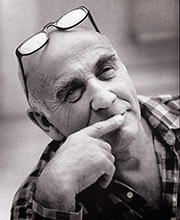 Warren Mitchell is well-known for his performance as Alf Garnett in the TV series Till Death Us Do Part and In Sickness and In Health. He has also played Willy Loman in Death of a Salesman at the Royal National Theatre (a role he later recreated for the BBC), and the title role in King Lear at the Almeida Theatre. He has worked extensively in theatre in Australia where his credits include The Homecoming, Uncle Vanya, and Hello Dolly.