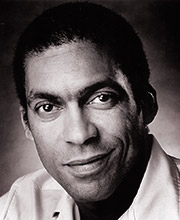 Ben Onwukwe is frequently heard on the radio in readings, plays and series. His television credits include London’s Burning, The Bill, Casualty, The Biz, Between The Lines, Growing Pains and Inspector Morse. Theatre work includes Cinderella, Smile Orange, The Emperor and Andromach. Film credits include The Chain and American Roulette.