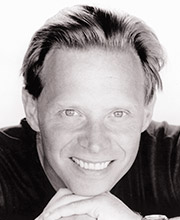 Brian Parr trained at RADA and has since played many parts including seasons with the RSC as mostly killers and clowns, Costard in Love’s Labour’s Lost, and Launcelot Gobbo in The Merchant of Venice. He has also worked for the BBC Radio Drama Company. TV credits include Eskimo Day and Summer in the Suburbs. In addition, he writes and directs pantomimes.