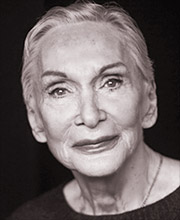 Award-winning actress of stage, film and television, Siân Phillips began with a childhood career in radio. Her stage appearances in London include The Importance of Being Earnest in the West End and Les Blancs at the National. She has worked for many great film directors and in Catalonia where she played the title role in the film Miss Dali for Ventura Pons. She was made a Dame for services to drama and is currently preparing for the lead role in the play Driving Miss Daisy.