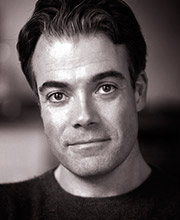 Robert Portal has appeared in film, television, radio and on stage. He played Maurice Haigh-Wood in Tom & Viv at the Almeida, Bob Acres in The Rivals and Aragon in The Merchant of Venice at the RSC. Television work includes Hogfather, Rosemary & Thyme and The Amazing Mrs Pritchard. Films include Mrs Dalloway.

Titles read by Robert Portal
The Merchant of Venice (unabridged)