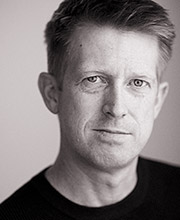 Ian Porter is an American actor who has been living and working in Britain since 1988. His film credits including Saving Private Ryan, The Bourne Ultimatum and Gulliver’s Travels with Jack Black. His television credits include The Execution of Gary Glitter, Inside the Mind of Adolph Hitler and Bonekickers. He has worked extensively on stage and has a busy voice-over career. He has voiced many computer games, as well as narrating audio books such as Nocturnes by Kazuo Ishiguro. He has also taken part in BBC Radio 4 dramas such as The Women’s Room and Valley of the Dolls.