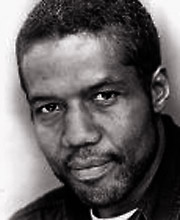 Hugh Quarshie lives in England but maintains close links with Ghana where he was born and spent the first years of his life. He studied politics, philosophy and economics at Oxford where he was president of the OU African Society and co-director of the Oxford and Cambridge Shakespeare Company. After graduating he worked as a journalist, becoming sub-editor at West Africa Magazine. He helped produce the Channel 4 arts programme Signals, and co-produced Othello at the Greenwich Theatre. He wrote the play The Prisoner of Hendon. He has worked extensively in film, television and theatre. Some of his credits include The Murder of Stephen Lawrence, A Respectable Trade, Star Wars: The Phantom Menace, and he has appeared with the Royal National Theatre and the RSC. Hugh Quarshie has made a special study of Othello. His paper Second Thoughts About Othello has been issued by the International Shakespeare Association (Occasional Paper No. 7). It was originally delivered by the author to inaugurate the 1998/99 Hudson Stroke Lectures on Race and Class in the Renaissance at the University of Alabama, Tusacaloosa.