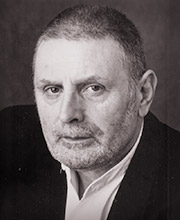 Terence Rigby has played Pozzo twice on stage. He was in Peter Hall’s 1998 production and then repeated the role in Hall’s 50th anniversary production at the Theatre Royal Bath in 2005. He has also played Davies in Harold Pinter’s The Caretaker at the Old Vic in Bristol – he has a close association with Pinter having appeared in US premières of The Homecoming and No Man’s Land, both directed by Peter Hall. His television appearances include Softly Softly, Tinker, Tailor, Soldier, Spy, and Born to Run with Billie Whitelaw. His films include Elizabeth, Dogs of War and Tomorrow Never Dies.