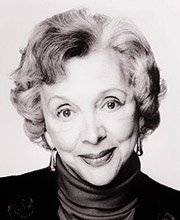 Thelma Ruby has starred in many West End shows including Cabaret, Kvetch and For Amusement Only. She has played Golde opposite the Tevye of Topol in Fiddler on the Roof four times, and played Golda Meir with her husband Peter Frye for eight years in Momma Golda. She has performed a one-woman show That’s Entertainment and has written her double autobiography, Double or Nothing, with her husband.