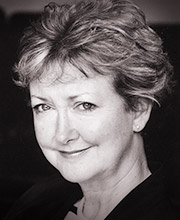 Susan Sheridan trained at The Guildhall School of Music and Drama, winning the Malvern Prize for comedy. A versatile actress, she has voiced cartoons from Noddy to Disney’s classic The Black Cauldron, was twice on the BBC Drama Rep, and was the original Trillian in the award winning The Hitch Hiker’s Guide to the Galaxy. She also performs her own stage play The Merry Wife of Wilton in which she plays the Countess of Pembroke.