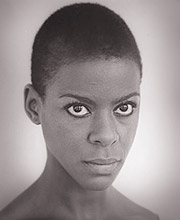 Josette Simon has performed major roles for the RSC including Isabella in Measure for Measure and Rosaline in Love’s Labours Lost. She won several awards (including the Evening Standard Best Actress Award) for the role of Maggie in the Royal National Theatre’s production of After The Fall as well as two more for her work in the film Milk and Honey. Other film credits include Cry Freedom and A Child from the South.