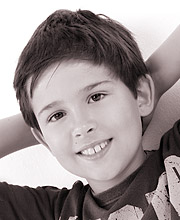 Harry Somerville has appeared in TV productions for CBBC and ITV as well as theatre, and has recently completed his first short film, Be Blessed, in a lead role. Harry loves reading and listening to books, as well as playing the piano and singing. This is his first reading for Naxos AudioBooks.