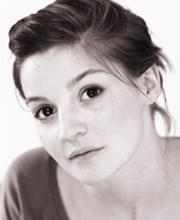 Flora Spencer-Longhurst’s television credits include Wallander, The Bastard Executioner, Inspector Lewis and the CBBC series Leonardo. She won Best Supporting Actress at the Fort Lauderdale Film Festival for her motion picture debut Walking with the Enemy, which saw her work alongside Ben Kingsley. She has many stage credits to her name, including Once (Phoenix Theatre), The Importance of Being Earnest (Theatre Royal, Windsor) and Love’s Labour’s Won (Royal Shakespeare Theatre).