Here at Naxos AudioBooks, we think a lot about actors, and we talk a lot about their various characteristics, their idiosyncrasies, their imaginative qualities and their habits! That is the nature of things, because actors are the public interface between the writers and the listeners.

But we don’t often talk about, or think about, the recordings themselves – the room, the microphone, the leads, the mixers, the compression levels, the way a work has been edited and even mastered. And that is way before the download parameters or the speakers or headphones that are used to convey the sound to us! 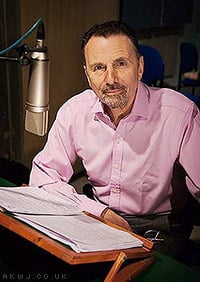 These are all regarded as key elements in classical music, of course, and certain labels pride themselves in high technical standards. It must be said that, often, it is not just about high standards, it is about personal opinion. What is a good piano sound or ’cello sound, or where an orchestra has been captured with a perfect balance of strings and woodwind, for example, is really extremely subjective. Which is where the real hi-fi buffs come in.

Some musicians can also be very concerned about this. My sister, a fastidious clarinettist in the studio, will spend most of the first session just making sure that the engineer has got the sound right – by which she means that what she hears coming out of the speakers is what she THINKS her clarinet playing should sound like! But this is fairly rare among musicians for most just want to get on with playing!

Somehow, this is not so critical with audiobook recordings. I have never known an actor ask to hear the sound of his or her voice (though some feel nature has endowed them with a truly magnificent instrument!

It must be said that when recording full drama, a lot of care is taken, not least because a specific environment has to be created in sound – a castle, a ballroom, a bedroom, the jungle at night – all have a different acoustic in our imaginations which is not just about sound effects, and the engineer has to go some way to service that vision. That’s the difference between a full drama, with sound effects and scene settings, and a multi-voice reading, where actors just stand around a mike and read their parts.

For single-voice audiobooks, the issue of sound is much less critical for a number of reasons. The first is that basically people just want to hear the story! They want to give themselves up to the magic of the story teller as he or she weaves his tale. And for most people, the sound of the studio is pretty irrelevant, noticed only when something goes wrong.

Our first recording studio was a small music studio which doubled as an audiobook studio. In other words, it was quite ambient. If you listen to the our early Jane Austen abridged recordings, or abridged Dickens or abridged Milton, or Michael Sheen reading Crime and Punishment, you can hear that studio. It was called Bucks Audio Cassettes, which dates it! You can go, on this website, to the page of the abridged Emma read by Juliet Stevenson, for example and you will hear the sound (after the music).

Then switch to her later recording of the unabridged Emma. Both are read by Juliet Stevenson but they actually sound very different, because Emma (unabridged) was recorded in the ‘normal’ audiobook way – in a ‘dead’ speech studio with a closer use of the microphone.

One is not right and the other wrong. It is a matter of personal preference. But in any case, for the most part, one gets used to whatever one is listening to very quickly because (one hopes) one becomes immersed in the story, caught by the skills of a born story-teller.

You can notice the difference most easily on CD, because you are then getting full sonic value. If you listen on an iPod or other MP3 players, it is less obvious because the recording has already been crushed down to MP3 format – though it must be said that MP3 formats are getting better and better these days.

Download a Naxos music recording from www.classicsonline.com, and you can bring it down in a number of formats, including lossless (FLAC) files which are indistinguishable from CD.

However, our audiobook engineers are still keen to produce the best sound they can even if 90% of listeners will hear the recordings on little MP3 players through tiny ‘bud’ earphones that really don’t do their technical expertise justice! They have to be philosophical about it.

Just the other day I was in the studio with one of my more articulate and particular engineers. He was bemoaning the fact that we were using a mike he didn’t approve of, though I thought it was perfectly okay for the purpose of an audiobook adventure story. ‘At least let me use my NT2s,’ he said, with a note of desperation in his voice. Then, only today, one of our producers, working at another studio, started to sing the praises of a microphone called The Baby Bottle.

‘You have got to be kidding,’ I said.

Apparently not. The publicity material says it has a ‘unique sonic signature with a rich and present midrange response, a smooth top-end and neutral bottom-end creating an extremely present classic and contemporary sound.’

I shouldn’t be so skeptical, really, because a lot of appreciation of sound can occur quite subliminally and contribute to the overall enjoyment. Of course, if the stories are being listened to on a bus or a train or an aeroplane, subtleties of recording are largely lost. We just need to be able to hear the words!

But if one is listening at home on a CD player, or even on a MP3 player walking around in a quiet environment, like walking in the hills, different recordings can be very evident.

And it is not just the sound of the studio, and the microphone. One recording engineer will naturally record with a bit more bass in the voice, while another will emphasise the higher frequencies. Of course, all this can be adjusted by the listener also, though I think it is rare that audiobook users actually do alter the sound quality… they just take the recording at face value.

See what you think. See how much difference you can hear. It helps to have a decent set of speakers or headphones, rather than just the average pair of ear buds – even though that is the reality of the standard audiobook experience.

You just may be surprised!