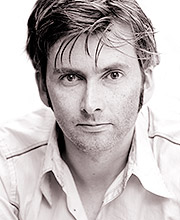 David Tennant achieved national and international recognition for his award-winning TV performances as Dr Who. The success followed extended work on film and TV, including Einstein and Eddington and Learners. But he is equally respected for his work in classical theatre. His Hamlet for the Royal Shakespeare Company was widely praised. Other classical work include roles in King Lear, As You Like It and The Rivals. He enjoys more contemporary theatre also, varying from Look Back in Anger and What the Butler Saw to Black Comedy and The Real Inspector Hound.

Titles read by David Tennant
From Shakespeare – with love (selections)