The History of the Audiobook

Audiobooks is currently the fastest growing segment of publishing, with its current value being estimated at $3.5 billion on the back of sharp increases over the past few years. The number of new titles being released into the market has escalated with the Audible platform offering well over 300,000 titles. As more consumers try (and explore) audiobooks both the market and the proliferation of new titles look set to continue.

But where did this all start? In a sense, it starts with storytelling… Since the beginning of human civilisation people told stories to each other. The oral tradition is a recurrent thread running through classical civilisation, most notably with Homer, but also his literary successors in both Greek and Roman culture. And well into the first millennium we see that reading out loud in public was the norm. The fundaments of storytelling (and listening) remain similar in the modern world, albeit sometimes in a different context – from parents reading a bedtime story, to commuters listening on their mobile devices.

While storytelling is a very old practice, the audiobook – recording the telling of a story – is a relatively new one. Towards the end of 1877 Thomas Edison recorded the nursery rhyme ‘Mary Had a Little Lamb’ and played it back on his newly invented phonograph. At this time the possibility of recording complete novels was mooted, but as Edison’s standard tinfoil cylinder only held a few minutes’ recording this ambition seemed unrealistic. This did not, however, prevent the widespread speculation, with The New York Times, among others, predicting novels being kept in homes as bottles in a wine cellar.

The dream of recording full-length books wasn’t fully realised until the 1930s, with the activities of the American Foundation for the Blind, which set up its own recording studios for this purpose and developed its own talking book player. This enterprise was undertaken in conjunction with the Library of Congress. Recordings were held by 12-inch phonograph records which played at 33 1/3 rpm, each side holding about 15 minutes of content. Thus it was that War and Peace required 118 records and the Bible as many as 169. It is worth noting that at this point the target market was very much the blind and visually impaired. 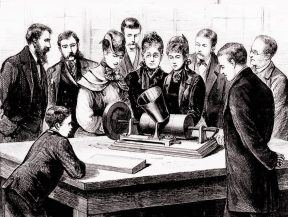 Thomas Edison demonstrates his phonograph at his laboratory, March 1878

The commercial launch of the LP, together with advances in recording technology, led to the advent of recordings aimed at a wider market, with companies such as Caedmon in the USA and Argo in the UK. Due to the limitation of a record’s playing time, many books were abridged and, indeed, the issue of abridgement is one with which publishers have grappled until recent years and the prevalence of digital technology. Books on Tape was founded in the mid 1970s and recorded its books in unabridged versions. By this time audio publishers were aiming for a wider market (often the commuter) and with some success.  Naxos AudioBooks was founded in 1994 and was the first audiobook publisher to release all its titles on both cassette and CD (a relatively new format at the time).

However, the real ‘revolution’ arrived with the adoption of MP3 and other subsequent digital software, coupled to the growth of online platforms and smartphone ownership. This facilitated consumer access to spoken-word recordings. Today over 80% of the audiobook market is digital, versus physical formats (mainly CD). Notwithstanding that, Naxos continues to release all its new audiobook recordings on the CD format as we recognise that this is the only means by which some customers can enjoy our products. However our recording are enjoyed, the increased range of talking books available to the public looks assured for some time to come.